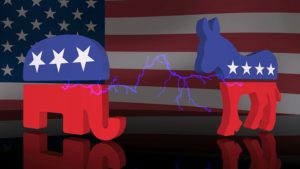 Bands and artists are sick of politicians using their songs without asking.  And now they’re combining their star power to do something about it . . .

Dozens of big names got together with a non-profit called the Artist Rights Alliance.  And they put out an open letter yesterday, calling on all of the major political parties to create rules so campaigns can’t use songs without clearing them first.

They used half of the letter to explain all the reasons they can SUE.  The rest is about why using their music without permission is, quote, “dishonest and immoral.”

It also talks about how it isn’t a new problem . . . that it happens every election cycle . . . and that it BACKFIRES a lot of the time.

Near the end, they say that, quote, “No politician benefits from forcing a popular artist to publicly disown and reject them.”  (You can read the full letter on Medium.com.)

Image by chayka1270 from Pixabay