Last month, rapper Tyla Yaweh released a track called “Tommy Lee” featuring Post Malone. Now, the pair have teamed up with the Mötley Crüe drummer himself on a remix of the song. Lee spoke of his involvement prior to the release of the original track, though his drumming wasn’t part of the original song. In the remix, along with an accompanying music video, Lee and Yaweh are featuring performing the song in the Mötley Crüe drummer’s studio. Along with Lee’s drumming, Rob Zombie guitarist John 5 adds guitar and bass.

Lee said in a press release, “I was humbled that Tyla and Post chose to name a song after me. I couldn’t wait to get my hands on it with them and give it my spin. We had a blast! They are the new rockstars! I love them both!”  Yaweh added, “I’ve got a legendary track with this bad ass rockstar Tommy Lee and my brother Post Malone. This track is so special to me!”  Lee previously teamed up with Malone on the track “Over Now,” which appeared on his 2018 album, Beerbongs and Bentleys.

Watch the video for the “Tommy Lee” remix at the link: here. 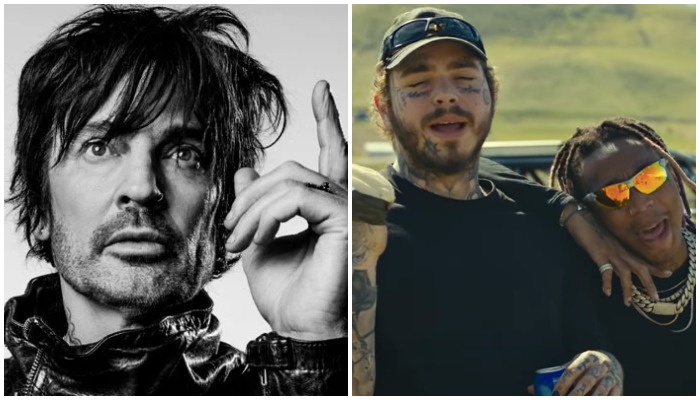 Via www.altpress.com
Post Malone and Tyla Yaweh have teamed up with Mötley Crüe drummer Tommy Lee for the…
07/10/2020 4:45 PM