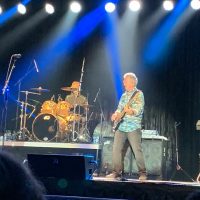 They grew up together. They became of of the greatest rock bands of all time. They topped the charts with hit after hit after hit. Then the legal battles began. John Fogerty went solo. Then Tom Fogerty died after an unscreened blood transfusion caused him to be infected with HIV, which led to his death. More legal battles. Finally, original members Doug “Cosmo” Clifford and Stu Cook won a court battle to perform as “Creedence Clearwater Revisited” and bring the music to the people around the world.

Doug “Cosmo” Clifford has been on Max Volume’s show many times telling the tales of CCR’s roots, and rise to fame. Stories like when Doug rode with John Fogerty and his Dad to Sears when John bought his first electric guitar (a Silvertone). How older brother Tom brought Doug, Stu and John into the studio to record the demos that would lead to a recording contract. Recently, with the 50th anniversary of Woodstock, Doug stopped in on Max Volume’s “Work Force Free Ride” to tell the story of Creedence performing there. It’s an amazing story of Helicopters and Monster Trucks and being left off the initial 3 Lp set.

Check out Doug and Max talking about CCR’s 50th Annivesary