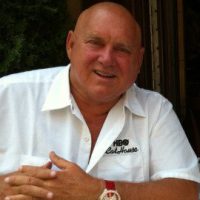 Colorful and outspoken brothel owner Dennis Hof has died. Close friend and porn star legend Ron Jeremy found him unresponsive this morning (at his “Love Ranch” brothel near Pahrump) when he tried to wake him for a meeting. He had just celebrated his 72nd birthday with a combination party and campaign rally the night before. Hof was running for a seat in the Nevada state Assembly, after knocking off an incumbent Republican in June. Hof will remain on the November ballot. If he wins, then county commissioners would need to appoint a Republican to take that seat until the next election in two years.

His “Moonlight Bunny Ranch” was made popular with the HBO series “Cathouse”. People who knew him, knew the articulate and business savvy, yet community focused person he was. Always personable, he was a guy you found hard not to like. Our thoughts are with his family and friends.