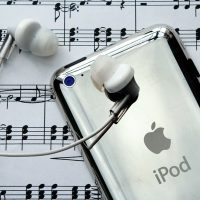 Apple’s iPod and iTunes media player went on sale two years pror and the Store would serve to the wants and needs of buyers looking for new tracks and albums, leaving the record companies lagging behind and wondering what hit it. In a few years, Apple’s innovations had completely changed the way we buy and play recorded music. Making it possible to upload thousands of songs into one tiny device, the Ipod was a hit.

Google and Facebook have helped fuel the viral fake news that Apple was planning to kill off all music downloads in iTunes next year in order to force users into an Apple Music subscription streaming plan. Apple’s Jimmy Iovine said “we’ll stop selling downloads when people stop buying them.”

5. Windows didn’t get iTunes until October 2003

8. The first mobile phone with iTunes was not an Iphone, it was the Motorolla ROKR. It was able to store 100 songs.

10. Itunes became the top music retailer in the US, toppling Walmart.

13. Apple Music is launched in 2015, moving from downloads to streaming.

I always think of downloads as a kind of “transistor radio” copy of a song. Low quality audio that plays on the tiny speakers of devices. However, it sure is cool to have all your music on a device that fits in your pocket!